When his Clock of the Nations was unveiled at Midtown Plaza’s opening, artist Dale Clark was dating a countess.

He asked her to marry him, under the clock, but she, being already married, declined.

It was worth a shot; Clark was riding high. A former Lockheed Aircraft engineer turned artist, he was in demand for large-scale sculpture and mural commissions around the country. He had just wrapped up a two-ton model of Television City for CBS. They were heady times.

“Meet me under the Midtown clock” became synonymous with the plaza’s glory days, which by its final Christmas were long gone.

Things were looking good for Rochester too, at least in the eyes of Gilbert McCurdy and Maurice Forman. The regional retail giants had pulled off the seemingly impossible—a scheme to restylize downtown shopping by quietly buying up properties adjacent to their department stores and creating an enclosed plaza. In 1962, the year it opened, Midtown was only the second indoor mall in the nation and the first in a downtown. It was modern with a capital M, sleek and sparkling and designed by none other than Victor Gruen.

Gruen’s vision embraced more than retail. He set out to create an urban town square, a shared public space where people could meet and gather. Such a setting, he wrote in 1960, would “provide the needed place and opportunity for participation in modern community life that the ancient Greek Agora, the Medieval Market Place and our own Town Squares provided in the past.” Trees, fountains, benches and artwork invited pedestrians to pause and relax, maybe chat with one another. Most true to his ideals were designs that blended residences, stores, offices, services and other daily destinations.

As U.S. suburbs grew, however, malls became little more than shopping centers conveniently reached by car. Gruen, an Austrian-born architect who pioneered new urbanismin this country, became known as the father of shopping malls and would later complain that his original vision had been lost in translation.

But on April 10, 1962, a crowd of 5,000 cheered as Mayor Henry Gillette and former mayor Peter Barry cut the ribbon to unveil the Clock of the Nations, the centerpiece of the new Midtown Plaza. A newspaper photographer’s camera captured Gruen in an embrace with McCurdy. Dignitaries congratulated each other. It was a day for rejoicing.

That day, the 39-year-old Clark stood to the side in a jacket and tie. It wasn’t his typical milieu. In those days he was living on a 60-foot sailboat in Long Beach, Calif. That he showed up at all had more to do with his relationship with his client, Gruen, than with any interest in Rochester and its new downtown mall. When I interviewed him in 2012, his memory had faded. What he remembered of the sculpture was very little.

He built it on a barge next to his boat in the Long Beach harbor with a dozen craftsmen, using sketches by Geri Kavanaugh, a Gruen employee. Capped by a spire, it stood 28 feet tall and had four standard faces. The stem of the sculpture was encircled by 12 capsules that rotated slowly like an elevated merry-go-round. The clock did more than tell time; it aptly represented the zeitgeist of the early 1960s. World cultures were presented as curiosities: The 5 1/2-foot capsules opened and closed to reveal mechanized puppets representing nationalities living in Rochester. On the half-hour, they danced to the music of their homelands as visitors marveled. “Meet me under the Midtown clock” became synonymous with the plaza’s glory days.

Anyone who crawls inside the clock will find Clark’s name welded into the surface. He had a small frame and said it wasn’t hard to get in there. He joked with a reporter before the ribbon-cutting that if the clock didn’t work he could climb inside and operate it by hand.

“At that time, that center was a pretty big deal,” he told me. “I’ve met people for the last 40 years or so that would tell me, ‘You built that? As a kid I used to go and wait for it to strike and the bells to ring.’ They couldn’t believe that I built that crazy clock.” 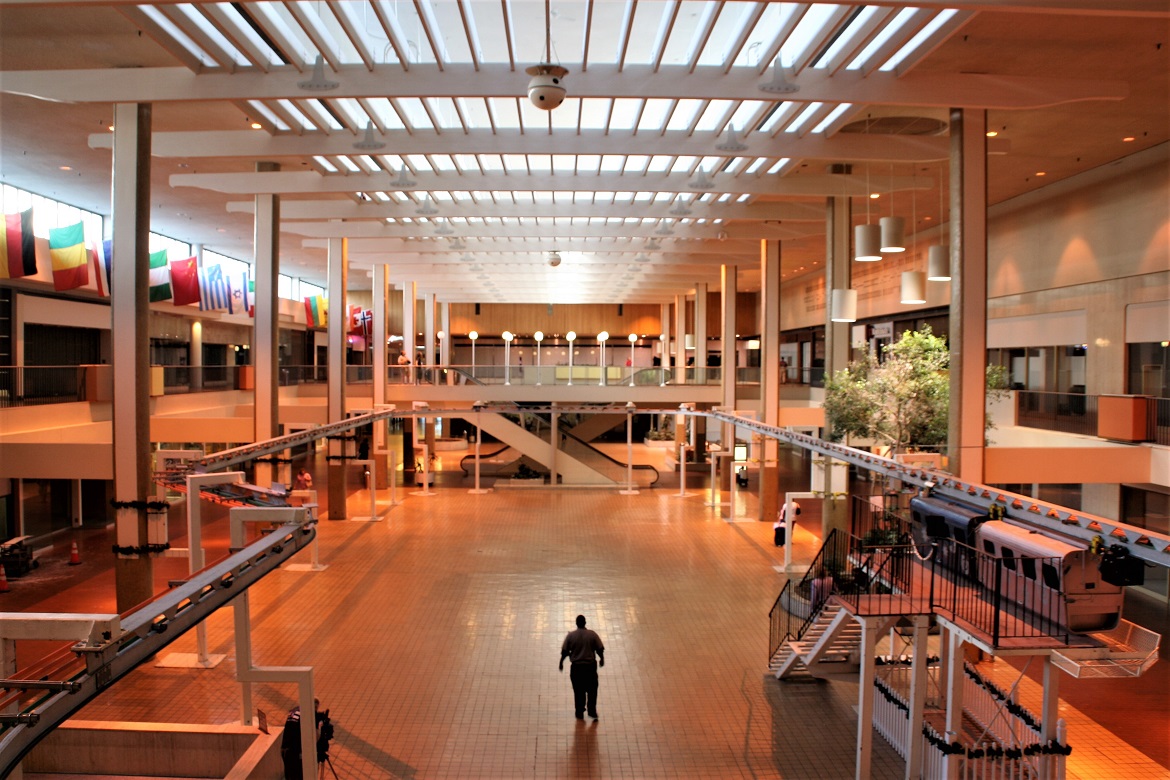 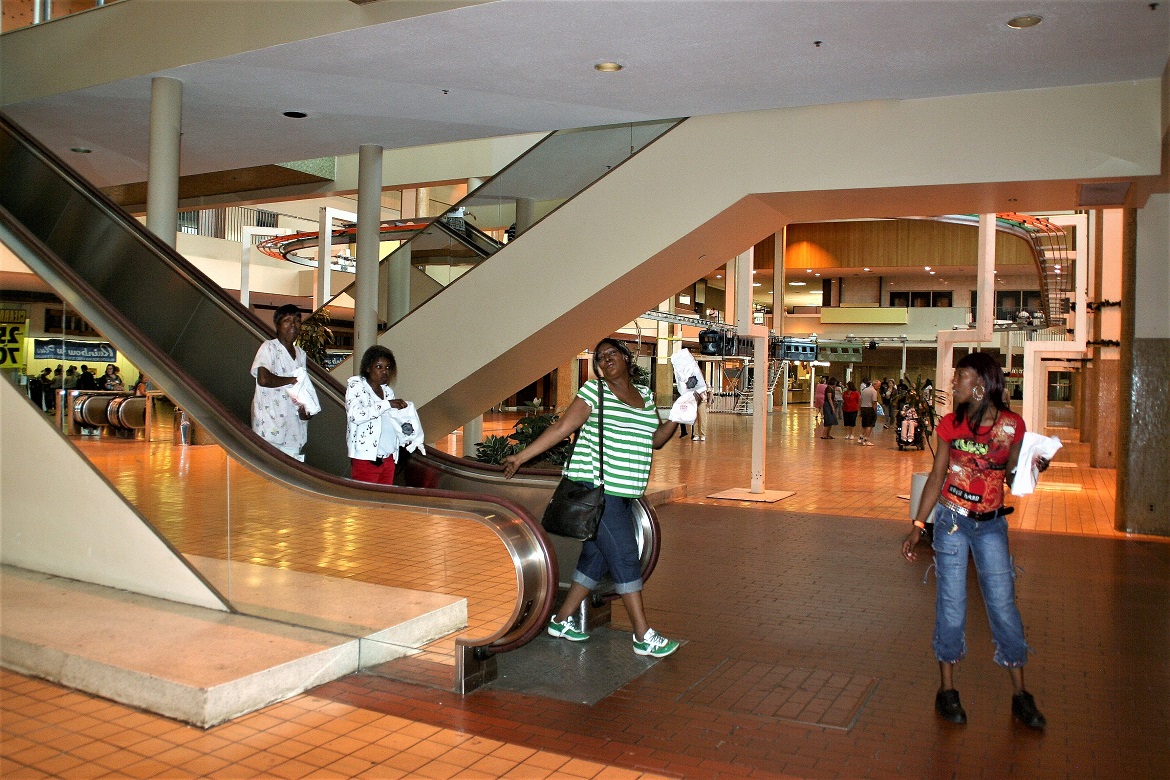 A few shoppers were still hunting for bargains on closing day. 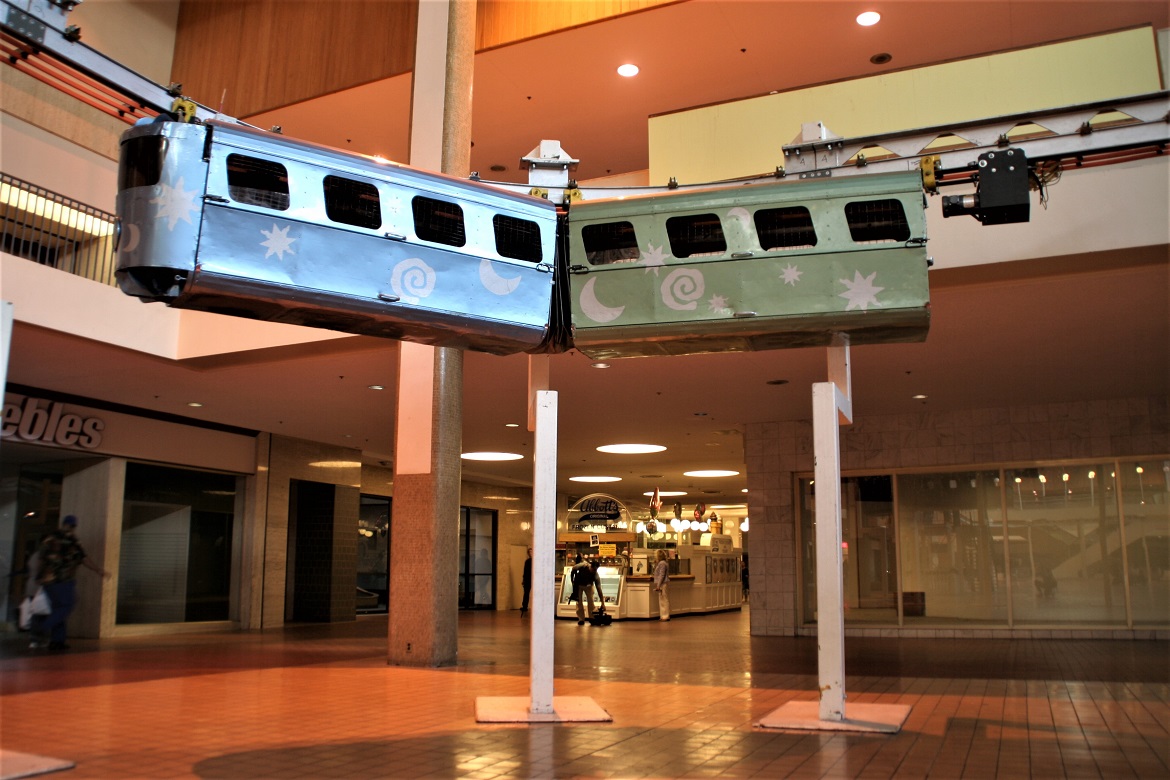 The Midtown Plaza Monorail operated during the Christmas holiday season. 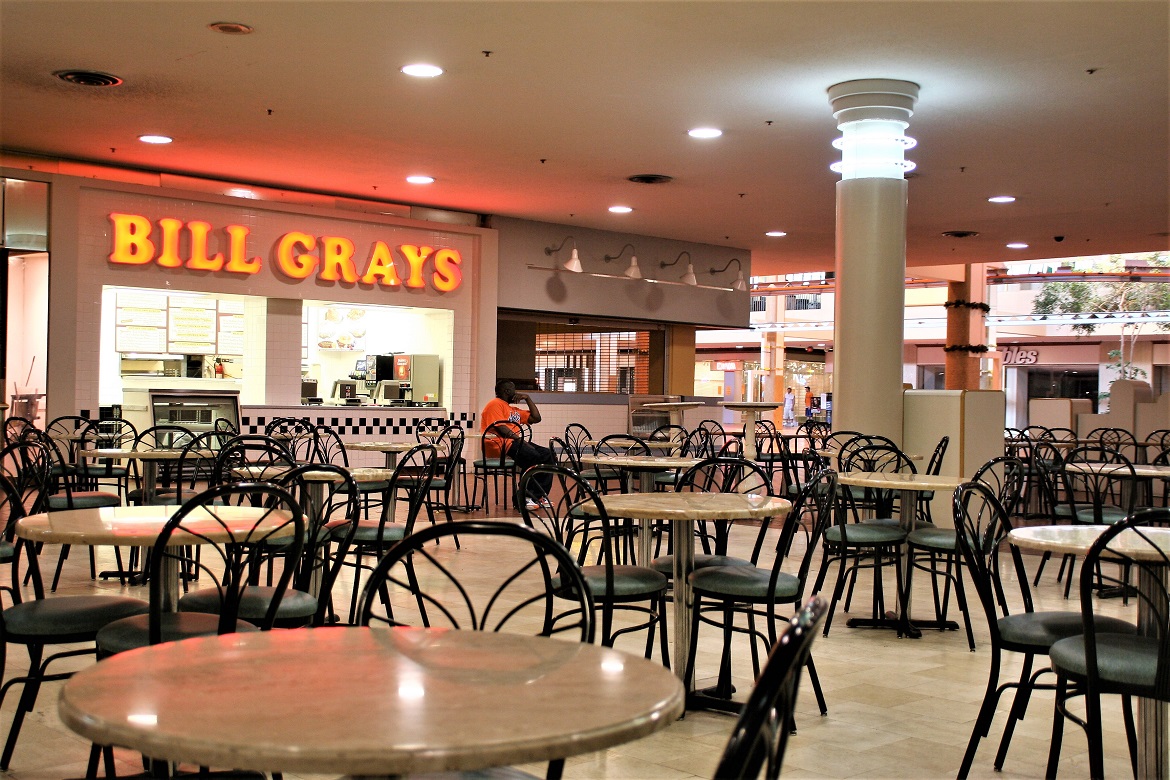 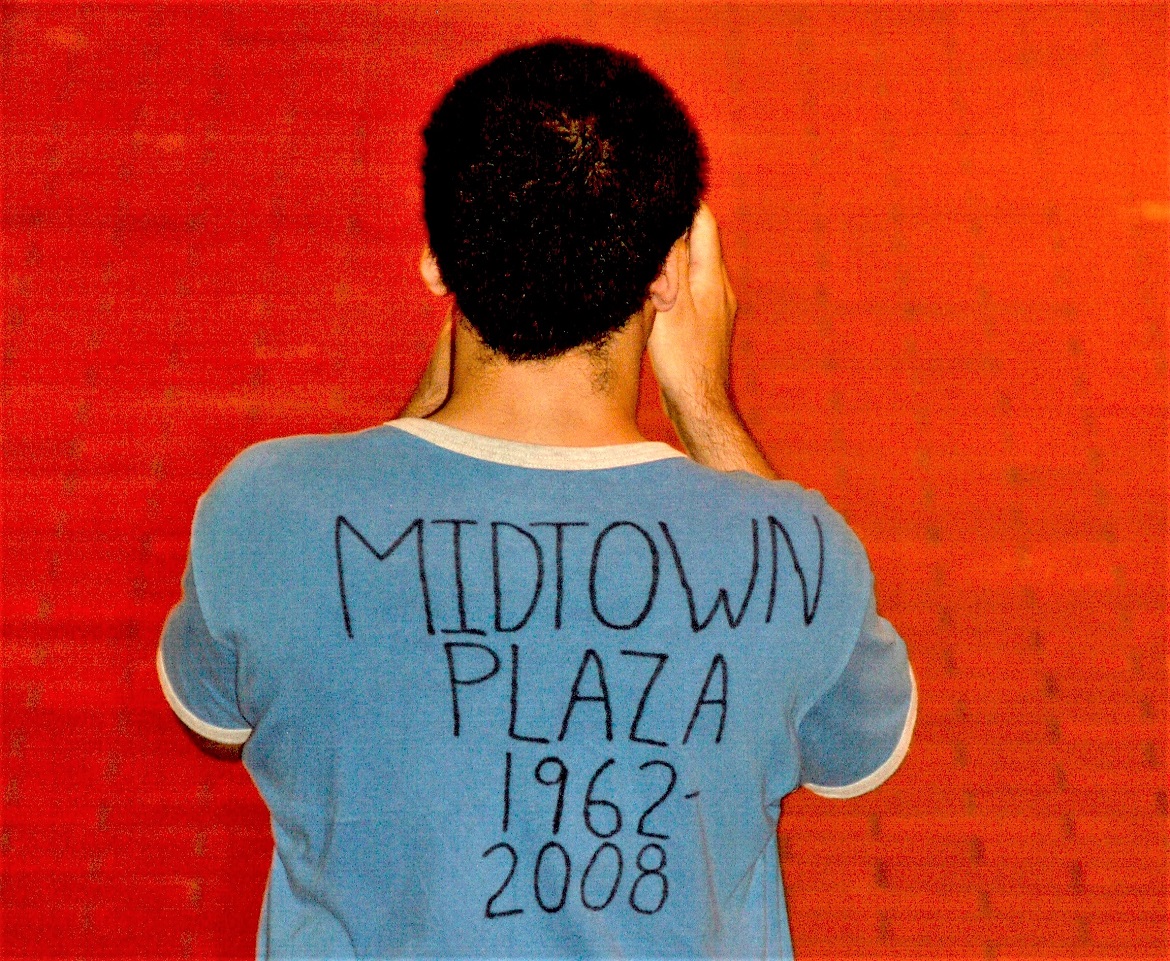 Before the doors closed for good on July 25, 2008, a visitor takes a few last photos.

It has been 10 years since visitors took final photos inside Midtown on July 25, 2008, and the plaza’s doors were locked one last time. The clock was moved to what was supposed to be a temporary location—beyond security checkpoints at Greater Rochester International Airport. (The planned final destination, Golisano Children’s Hospital, decided it didn’t fit.) Out-of-code wiring and controls were repaired or replaced. Its puppets still twirl to tinny folk songs. But the centerpiece of Rochester’s groundbreaking downtown mall now is out of sight to all but travelers in and out of the airport.

Though its theme seems quaint by modern standards, Clark’s interpretation of cultural awareness was considered cutting edge for the time. A newspaper reporter described the artist’s “screaming orange” cable knit sweater, tousled hair and disregard for convention when he interviewed him on a break during the clock’s installation. As he would continue to do throughout his career, Clark welcomed the perception that he was out of the mainstream, even radical. “I practice yoga, and that has given my life direction,” he told the reporter. In 1962, yoga was just making inroads on the West Coast.

Gradually, Clark started saying no to large-scale corporate projects and turned his attention to activism. Through his art and a lifelong desire to question everything, he railed against the evils of war and championed children and the homeless. In 1986, he built a house out of 16,000 sticks of dynamite—the country’s per-person nuclear power at the time, expressed in explosives—and toured it across the country for six months, including a stint across from the White House.

Clark died in March at the age of 94. For years he lived off the grid between Tombstone and Bisbee, Ariz., in an old mining town.

“Artists took over when the mines closed up and you could buy up a home for $5,000,” he said. “They’re most of them bonkers, so I feel very much at home.”

Clark’s marriage proposal all those years ago to the countess probably was the first of many under the clock. Like the others, it has faded into the past.

2 thoughts on “The hands of time”