The Rochester Beacon 2019 Economic Forecast Forum drew some 150 people to the College at Brockport Downtown on Chestnut St.

Such was the initial tilt of panelists at the Rochester Beacon’s Jan. 28 Economic Forecast Forum. Those views were later challenged, however.

The forum was the first in what the digital news venture plans to be a series of events meant to spark discussion among disparate segments of the Rochester community on the area’s challenges and how we might meet them.

Roughly 150 attendees crowded the College at Brockport’s auditorium at the Rochester Educational Opportunity Center on Chestnut Street downtown. The event was hosted by the college’s Institute for Poverty Studies and Economic Development and sponsored by Bond, Schoeneck & King PLLC.

Several presenters’ takes on the year to come dwelt largely on the region’s undeniable challenges. One panelist—and a contingent in the audience—pushed back, however, arguing for a more hopeful take on the region’s prospects. The panelists who seemed to initially focus on gloom conceded that the optimists made valid points.

The Beacon has posted the slide deck of the panelists’ presentations. You can view it here.

Kent Gardner, Rochester Beacon opinion editor and Center for Governmental Research chief economist, set the stage. The national economy and the U.S. dollar remain strong, Gardner said. But risks may outweigh upsides, among them “chaos in Washington” while we face continued competition from a bulked-up China along with Eurozone uncertainty. Add to that pressure on the job market, which will tick up as robots displace blue-collar workers and self-driving vehicles throw truckers and Uber drivers out of work.

Among the presenters were three Albany-based experts: E.J. McMahon, founder and research director of the Empire Center for Public Policy; pollster Don Levy, director of the Siena College Research Institute; and Heather Briccetti, president and CEO of the Business Council of New York State Inc. Also on the panel was Kate Washington, CEO of OWN Rochester, a nonprofit cooperative business development corporation.

McMahon ran through a familiar list of statewide and Upstate New York challenges. Rust Belt woes are actually worse in Upstate New York than in other Great Lakes states, he warned. Private-sector employment growth in the Rochester area and throughout Upstate New York is half that of the country as a whole. A gap between the economies of a more prosperous downstate region—New York City, Long Island and the counties of Westchester, Dutchess and Orange—and the rest of the state continues to widen.

On the whole, the state is losing population as outmigration outpaces births and new arrivals. New York will consequently lose two congressional seats in the next census. Both will come out of upstate regions, McMahon predicted. Boding ill for New York and particularly for upstate is that new residents are poorer and include more immigrants than the departing contingent, he said.

Direst of all the negative omens McMahon sees is declining public school enrollment, which has sunk to a 30-year low. That drop is a sure sign that young families are decamping in large numbers, and when young families abandon a region, “you’re done,” he said.

“There are reasons for optimism,” McMahon noted, a drop in the unemployment rate, for one thing. Still, he added, his hopes for a more positive future are in part based on his view that the Rochester region and the rest of Upstate New York “are looking up from the bottom of a very deep well. There’s nowhere to go but up.”

During her presentation, Briccetti outlined a list of what the Business Council sees as factors dimming the state’s prospects for recovery.

Her list consisted largely of initiatives Gov. Andrew Cuomo touted in his recent State of the State and budget address as objectives he hopes to realize now that Democrats for the first time in years control both houses of the Legislature and the governor’s mansion.

If enacted, single-payer health care would “cost more than the entire state budget,” Briccetti said. A more labor-friendly state government would likely impose unsavory costs on business as would initiatives to promote aggressive carbon reduction. “Tax mischief” and more aggressive state regulation of industry and business would further wreak havoc on the ailing state, in her view.

To lower its carbon footprint, the downstate utility Con Edison, for example, is holding off on installing new natural gas lines. The result, said Briccetti, is that customers are forced to rely on dirtier fuel sources. Reduced carbon through more reliance on wind and solar generation might be an admirable goal at some point, but in the short term, the state is promoting poor policy, she maintained.

Levy relayed the results of Siena’s poll of some 960 New York business leaders. (See the Rochester results.) In line with McMahon’s and Briccetti’s observations, the survey showed that the business leaders’ “confidence in New York is abysmal,” Levy said.

Most think the state is overregulated and overtaxed. By contrast, their confidence in the national economy was high. Most saw federal tax reform as positive but view state moves to enact paid family leave as a costly negative, for example. The polling period began in October when the national economy and the stock market were at peak levels and the recent federal government shutdown was not even a blip on the horizon, Levy noted. 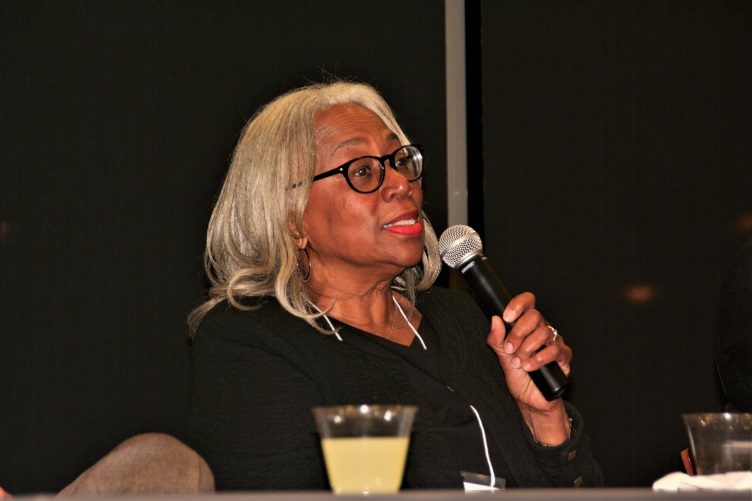 Panelist Kate Washington is CEO of OWN Rochester, a nonprofit cooperative business development corporation whose aim is to create jobs and build wealth in low-income communities. 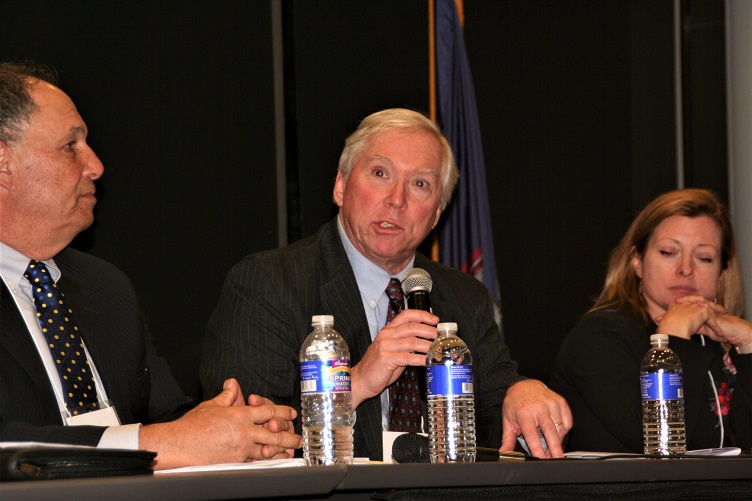 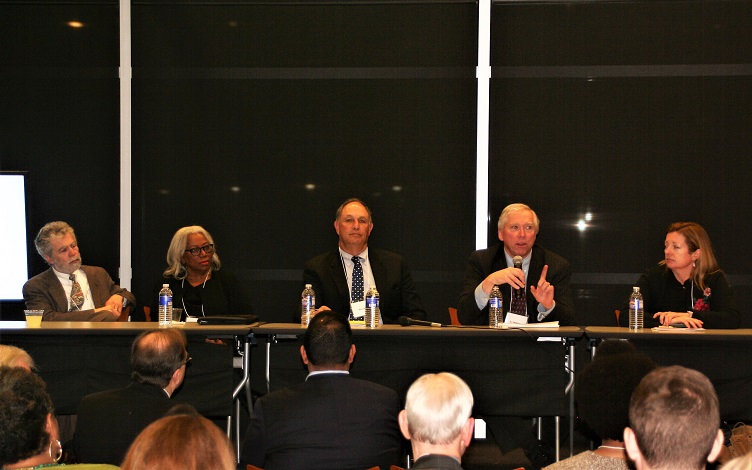 On the panel, from left, were Kent Gardner, CGR chief economist and Rochester Beacon opinion editor; Kate Washington, CEO of OWN Rochester; Don Levy, director of the Siena College Research Institute; E.J. McMahon, founder and research director of the Empire Center for Public Policy; and Heather Briccetti, president and CEO of the Business Council of New York State. 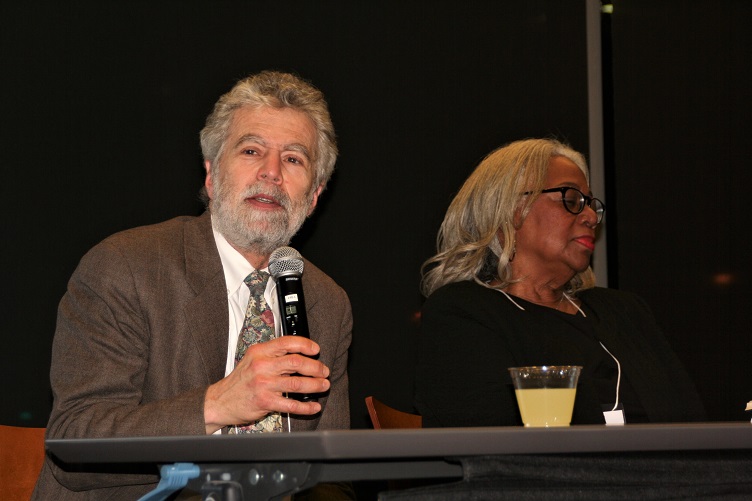 Rochester Beacon opinion editor Kent Gardner responds to a question from the audience. 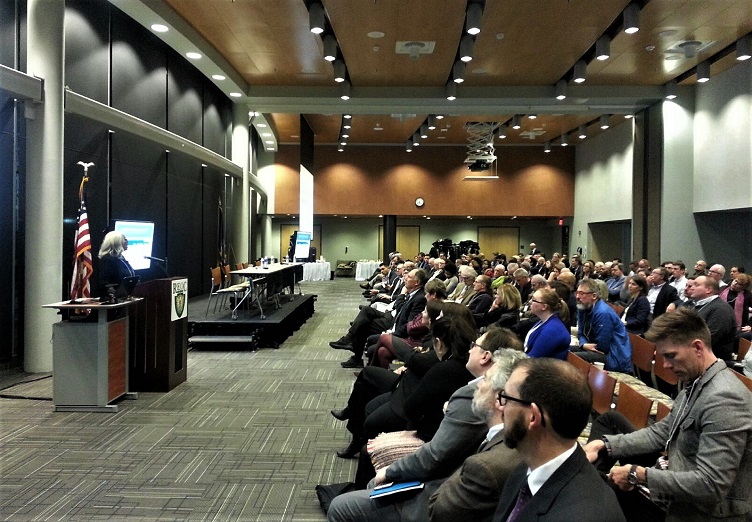 Bond, Schoeneck & King PLLC was presenting sponsor of the event, which was hosted by the College at Brockport’s Institute for Poverty Studies and Economic Development.

“Every system is perfectly designed to get the results it gets,” she said, quoting a maxim coined by physician Paul Batalden, a guru of quality improvement in health care.

Rather than bemoaning the supposed burden of a poorer population and the problems of dealing with immigrants, Washington said, we should see such people as human capital that can contribute to the region’s general weal and increase its wealth. Workers can be helped and encouraged to pull themselves up by their own bootstraps if they have a stake in their own businesses, she believes.

Such businesses can set up as employee stock option plans, socially conscious for-profit B corporations, self-owned worker cooperatives or gig-economy efforts, Washington said. OWN Rochester is currently in the process of establishing three such firms in sectors that typically employ low-wage workers: child care, home health care and food service.

In a brief question-and-answer period, audience members challenged some of McMahon’s and Briccetti’s assumptions.

Deborah Stendardi, Rochester Institute of Technology vice president of government and community affairs, noted that neither had factored in to their predictions the Rochester region’s 19 private and public institutions of higher learning.

That group includes not only RIT and the forum’s host, the College at Brockport, but also the University of Rochester, the area’s largest employer, as well as Nazareth College, St. John Fisher College and Monroe Community College.

Were it not for such resources Rochester could not have survived the virtual collapse of its once mainstay industry, Eastman Kodak Co., McMahon conceded.

Taking issue with what he maintained was McMahon’s “skewed” selection of data, Richard Glaser objected that the city McMahon described bears little resemblance to the Rochester he is familiar with.

A locally-based financial adviser and venture capitalist, Glaser is founder of RocGrowth, an organization focused on supporting private-sector investment and entrepreneurship.

“Nobody I know in high tech looks at state government the way you describe it,” Glaser told McMahon.

“I completely agree with those who criticized me,” McMahon responded.

What conclusions might be drawn from this back and forth?

An observation that Beacon co-founder Gardner made at the event’s kickoff seems apt: “Economists generally predict that the coming year will be much like the last one … unless it isn’t.”

4 thoughts on “Views clash at the Beacon’s economic forum”