Lea Thome is proud but understandably tired. The rising senior at the University of Rochester did a lot in the last year—aside from surviving a global pandemic, she fought against a Department of Homeland Security decision that threatened her and other international students with deportation.

A native of Germany, Thome has been living abroad since secondary school. She is just one of more than 5,000 international students in the Rochester area who were threatened by the federal decision.

Early 2021-2022 enrollment and retention numbers suggest that those students, who a year ago were fearful and confused, have weathered the storm and maintained their strong community here. At UR and Rochester Institute of Technology, first-year enrollment numbers show promise.

Still, experts caution against the assumption that international students will want to study in the United States. Nationally, international student enrollment started declining in 2016 for the first time in 50 years. The downturn coincided with a series of aggressive federal actions toward immigrants. For example, a 2017 executive order banned Syrian refugees and foreign nationals from predominantly Muslim countries entry into the United States. During that time, other countries like Canada became attractive options for foreign students.

When Thome was faced with the risk of deportation, her reaction, which was fueled by fear and anger over having to leave the United States, turned from a viral Instagram post to an online petition and advocacy website.

“I was thinking about all of the international friends I have here in the U.S. and I got really, really angry,” Thome says. “Because at that point, just like them, I was living for three months all alone in my college dorm room, really depressed, really lonely. I hadn’t seen my family for a long time. And it’s like, on top of a global pandemic now I and others have to think about deportation?”

Her change.org petition received more than 400,000 signatures before the Trump administration reversed its course roughly a week later and dropped the changes. However, Thome was not done with working for change.

“The actual post was shared something like over 100,000 times,” she recalls. “At that point, I said, ‘Listen, this post cannot be the end of it. There’s no actual advocacy group that talks with and about international students, working to educate and inform them about these issues that could damage them. So, we need to keep it going.

“And that’s how International Student Action was born, ” Thome notes. “We want to set up a network and information sharing system across campuses to help each other.”

Rochester-area universities boast a high percentage of foreign-born students. In 2019, one in 20 enrolled students nationwide were international. At UR and RIT, those numbers were one in three and one in seven, respectively.

“Despite it not being in a global place, Rochester has a very global, vibrant community,” Thome says.

After a dip in 2019 and 2020, first-year foreign-student enrollment numbers for the 2021-22 academic year are rising again—to 25 percent of total enrollment at UR and 13 percent at RIT. 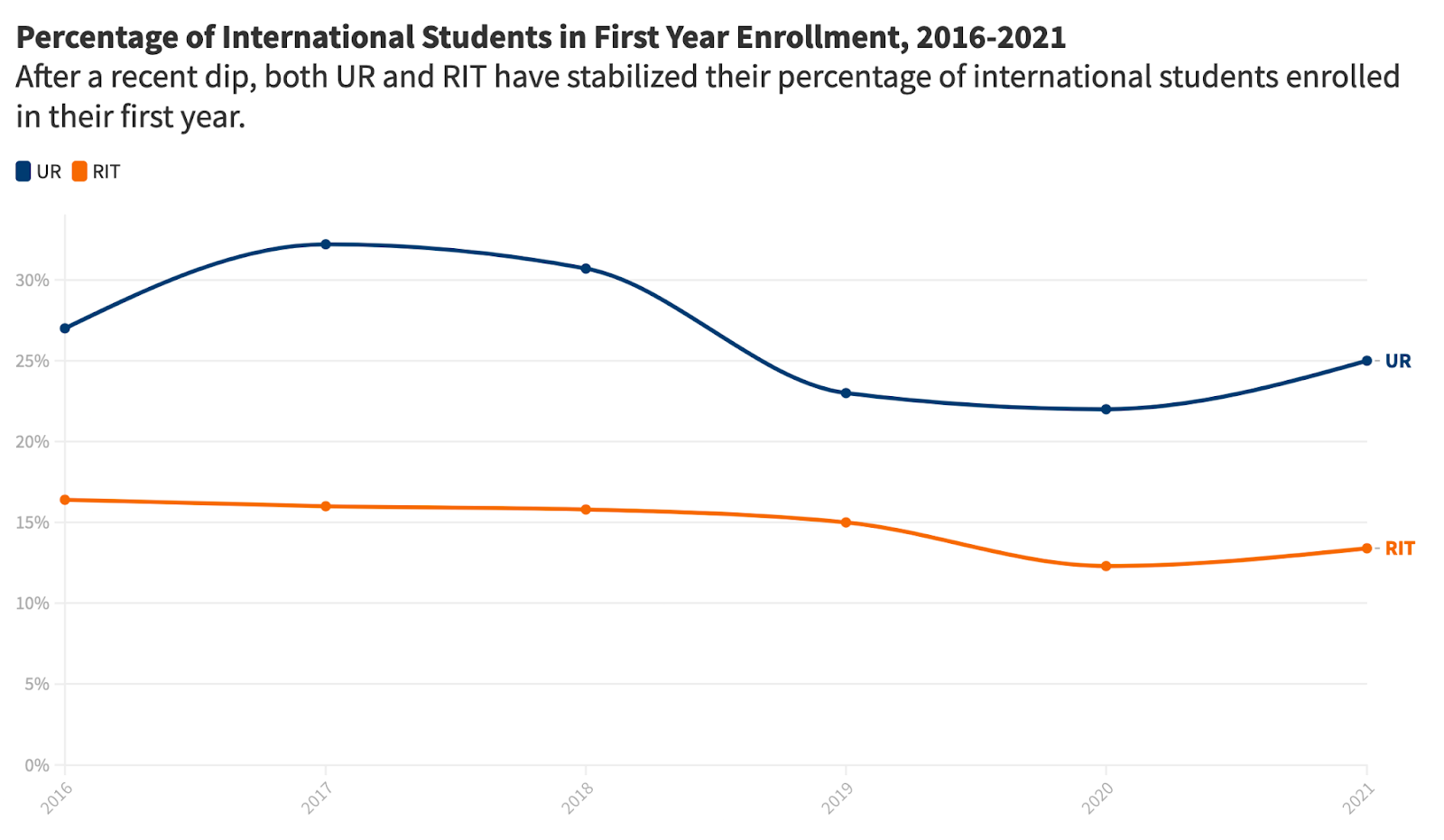 Paul Keller, director of international enrollment at RIT, although urging caution about assuming international students will automatically return, does see the situation as improving compared to last year.

“The term ‘perfect storm’ might get used too much, but that’s what (2020) felt like. The coronavirus (outbreak) combined with what was happening in Washington made for a really difficult situation,” Keller says.

South Africa’s Sakhile Ntshangase, a recent UR graduate who was attending school at the time, recalls being worried.

“Everyone was on edge all the time, worrying we might be deported for whatever reason,” he says. “We didn’t know if the university was going to tell students to go home like so many others had done.”

Logistical hurdles were another challenge. Running a university on a hybrid model reliant on remote instruction wasn’t easy.

“There were a million details that we and the advisers had to figure out. But we were also lucky because we have the RIT global campuses, so some students went to our satellite sites in Beijing or Dubai,” Keller says. “We made the best out of a bad situation, RIT’s COVID mitigation plan was good and students actually followed it, and because of that, a lot of international students were able to actually still be on campus.”

Says Ntshangase: “We were really lucky that the university pulled up like they did, providing accommodation for all international students, giving financial aid, and food and necessities like that.”

Even with the reversal of the original decision, the threat of deportation still loomed in some students’ minds as the Trump administration toyed with the idea of altering student visas further in fall 2020. It would force certain students to reapply after two years, depending on their country of origin. Because of those possibilities, many students took an unusual interest in last year’s presidential election.

“There was a four-year worth of a sigh (of relief), I think by all of us,” Ntshangase says about the 2020 election results. “A lot of us as international students don’t have a stake in U.S. politics, most don’t care, but this one everyone had their eyes on.”

Although advocates are pressuring him to go even further, President Joe Biden already eased Trump-era bans in April by allowing students to study online if campuses close for COVID-19 outbreaks. Ntshangase, while not overly supportive of Biden, still sees him as giving international students a chance to relax, however slightly.

Institutions’ eagerness to recruit and retain international students is, at least partly, connected to higher tuition. Rising costs at universities have driven schools to compete for students who can afford higher tuition rates, Keller says.

Tuition with room and board for full-time undergraduate students entering fall 2020 was $67,276 at RIT and $79,490 at UR. According to a report from Collegeboard, both universities were well above the $50,770 national average for private four-year institutions that year.

Although tuition costs for undergraduate international students are not readily available, out-of-country undergraduate students at the National Technical Institute for the Deaf at RIT pay $36,660 in full-year tuition, double that of a domestic student. In fact, the Collegeboard report found that, across the nation, international students pay twice—and sometimes three times—as much in student fees.

Thome, who receives financial aid and has worked a number of part-time jobs on campus, says the perception of international students as cash cows for universities is a dangerous stereotype.

“It’s a very common argument that I hate to hear about because it treats students like an economic commodity and a monolith,” Thome says.“We shouldn’t have to be an asset to be valued or welcome here. Everyone is worthy of receiving education whether that is in their home country or abroad.”

For those who don’t believe that international students add value beyond finances, Thome points to herself as an example.

“Going abroad and living with different cultures definitely helps in understanding other people better, being open to trying new things. Even if people don’t go abroad, they can experience that through having international students around them.”

Ntshangase believes Rochester benefits from international students. They educate the community on global issues, offering opportunities to support and befriend people with roots in different countries. A student group Ntshangase co-founded, the International Student and Scholar Advisory Board, is already working toward that goal.

“In Lebanon, for example, there was a bombing. In Ukraine, there’s civil war going on. So what do you do with those issues?” Ntshangase says. “As ISSAB, we passed legislation in the (UR) student senate that established a crisis response team to reach out to students when a crisis happens. For example, if a hurricane hits in India, we will reach out to those students and offer support.”

Keller agrees. Part of his job is to build empathy and understanding on campus.

“We’re now trying to figure out how to honor people’s experiences,” he says. “And some people want to do that by watching movies or reading books, but I think the greatest way to understand people from a different background than you is just to hang out with them. And teens and young adults are the best at hanging out.

“In some ways,” he adds, “having an international campus means this learning happens by osmosis. Simply put, having international students makes it easier to learn about the world, but also yourself too.”

Jacob Schermerhorn is a Rochester Beacon intern. He is pursuing a graduate degree in journalism at City University of New York.