A great city is … what, exactly?

This question is one that’s stuck with me over the years. In 2009, when Rochester was marking its 175th anniversary, I wrote a piece suggesting, half-jokingly, that the answer might lie with former Supreme Court Justice Potter Stewart’s definition of hard-core pornography: you know it when you see it.

The question came to mind again recently when Mayor Lovely Warren took the wraps off the city’s draft comprehensive plan. The nearly 500-page Rochester 2034 document is nothing if not ambitious. It is a 15-year plan that spans an array of topics, from housing and historic preservation to arts and culture, transportation, tourism and economic growth.

If Rochester achieved the goals outlined in the draft plan, could it lay claim to being a “great city”? Which brings us back to the knotty question: What makes a great city?

When researching the topic for the article I wrote a decade ago, I quickly realized that urban experts’ views on it were all over the map. One point of agreement, however, was their disdain for the much-touted lists and surveys that rank cities in terms of their “quality” or “livability.” Mercer, for example, produces an annual worldwide Quality of Living Ranking. For 10 years in a row, Vienna has topped the list, followed this year by Zurich and Vancouver. But the ranking is determined by criteria of importance to a narrow demographic slice: expatriate executives. I’ve been to all three of those cities, and they’re really nice—if you can afford to live there.

Among the most trenchant critics of the conventional wisdom about great cities is Joel Kotkin, author of “The City: A Global History.” In a 2009 article, he wrote: “What truly makes a city ‘great,’ or even ‘livable’? The answers, and how these surveys determine them, are often subjective, narrow or even misguided.”

Kotkin questioned how any city that’s among the most expensive globally can also rank high in terms of livability. He noted that these cities typically also have high taxes and stagnant job markets.

“With their often lovely facades, ample parks and good infrastructure,” he wrote, “they constitute, for the most part, a list of what Wharton’s Joe Gyourko calls ‘productive resorts,’ a sort of business-oriented version of an Aspen or Vail in Colorado or Palm Beach, Fla.”

What standard would Kotkin use for judging cities? He admires places that are “aspirational,” marked by “yeasty confrontation.”

He wrote: “What makes for great cities in history are not measurements of safety, sanitation or homogeneity but economic growth, cultural diversity and social dynamism. A great city, as Rene Descartes wrote of 17th-century Amsterdam, should be ‘an inventory of the possible,’ a place of imagination that attracts ambitious migrants, families and entrepreneurs. … Ultimately great cities remain, almost by necessity, raw (and at times unpleasant) places.”

More than a century before Kotkin’s article appeared, Henry James expressed a strikingly similar view: “It is difficult to speak adequately or justly of London. It is not a pleasant place; it is not agreeable, or cheerful, or easy, or exempt from reproach. It is only magnificent.”

I found that quote in a 1960s Time magazine essay that attempted to answer the “great city” question. The writer found it “almost easier to say what it is not. Except for its wealthy elites, great cities do not always provide easy or gracious living; lesser communities are almost always more comfortable. … Stockholm, Geneva and Johannesburg are three of the most comfortable cities in the world, but not one of them has even a shadowy claim to greatness.”

I have not been to Johannesburg, but Stockholm and Geneva definitely are among the most beautiful cities I’ve ever seen. Pretty unaffordable too. Same goes for Paris, with its spruced-up—and very pricey—central arrondissements.

Alexander Garvin shares Kotkin’s view that to be considered great, a city must be aspirational. As he has written, “it must offer people a chance to achieve their dreams.” But Garvin, a renowned urban planner and author of “What Makes a Great City,” doesn’t think great cities need be scrappy places that get on your nerves.

In his book, Garvin points as an example to Bilbao, Spain, which 30 years ago was an “economic basket case” but has become a thriving metropolis. Many people credit the Frank Gehry-designed Guggenheim Museum that opened in 1997 and draws thousands of tourists, but Garvin says the museum does not explain Bilbao’s transformation.

“Bilbao (became) a great city by investing in its streets, squares, parks, and infrastructure,” he writes. “These are the parts of the city that people share in common, occupy together, and use on an everyday basis.”

In other words, it’s the public realm—spaces shared by all—that is central to what makes a city great. Streets, squares and parks are not merely amenities; they are the heart of vibrant, livable and sustainable urban environments.

“A great city (must) be easily accessible, safe, and friendly,” he writes. “It also must include a wide array of well-maintained amenities that are open to anyone and provide something for everybody.”

Garvin is a fan of places like Bryant Park in New York City. Once an open drug den, Bryant Park was remade into an award-winning park that is a magnet for a diverse mix of city residents and visitors. Managed by a nonprofit corporation, the park is spurring nearby development of condos and rental apartments, grocery stores and restaurants—and could be a model for future development of Rochester’s Parcel 5.

Earlier this month I spent nearly a week in Krakow, one of Rochester’s sister cities. It was my third time there, but the first in 35 years. My previous visits, in 1981 and 1984, were in the dreary Soviet bloc days—a few weeks before Poland’s Communist government declared martial law to crush the Solidarity labor movement and again less than a year after the decree was lifted.

I knew Krakow would be much changed but nevertheless was stunned by its revitalization. In late spring 1984, the heart of the city—Rynek Glowny, Krakow’s ancient market square—was eerily quiet; in the queues for food and other items, the faces were dull and dispirited. At a popular Old Town restaurant, one of two entrees on the menu was “goulash”—which turned out to be a plate of chicken hearts awash in a puddle of watery gravy.

Today, the central square and surrounding streets—several converted to pedestrian-only zones—are lined with cafes, bars, shops and restaurants of every variety. Day and night, the Old Town is filled with people. Urban redevelopment now stretches to Kazimierz, the old Jewish quarter, and has begun to reach across the Vistula River. 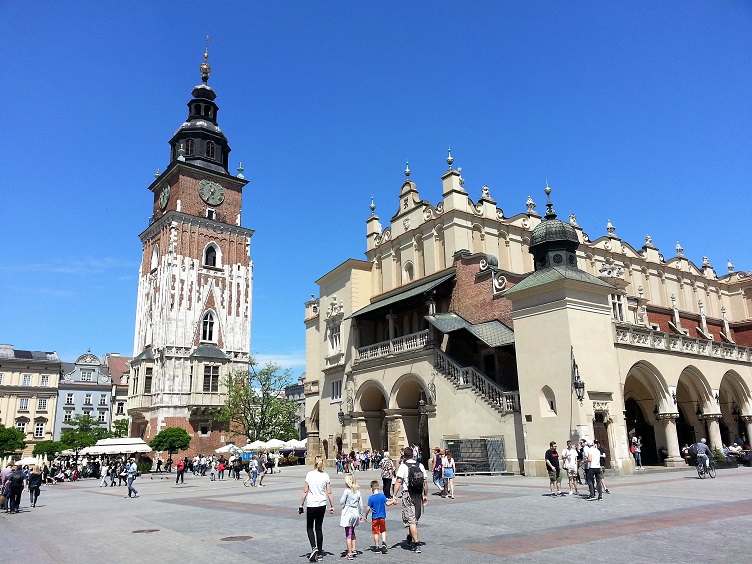 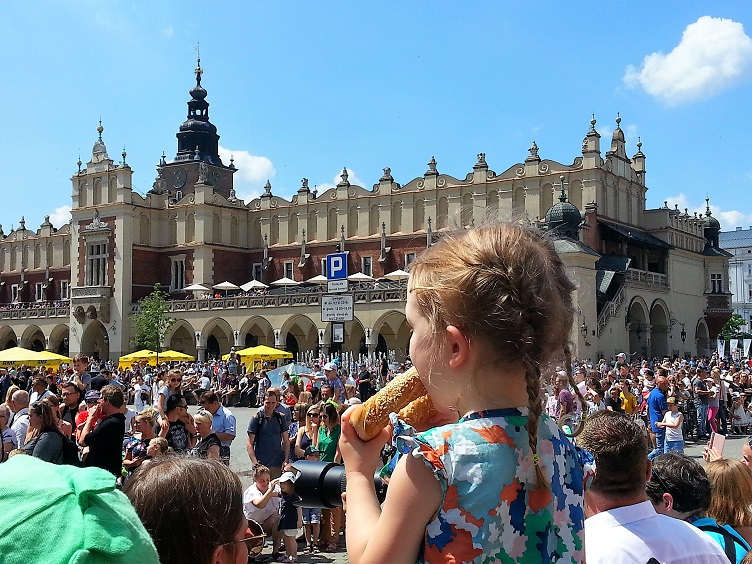 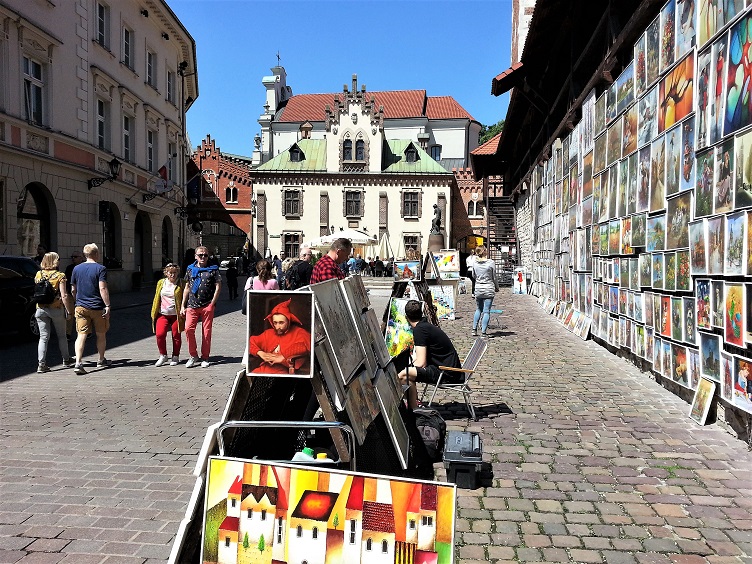 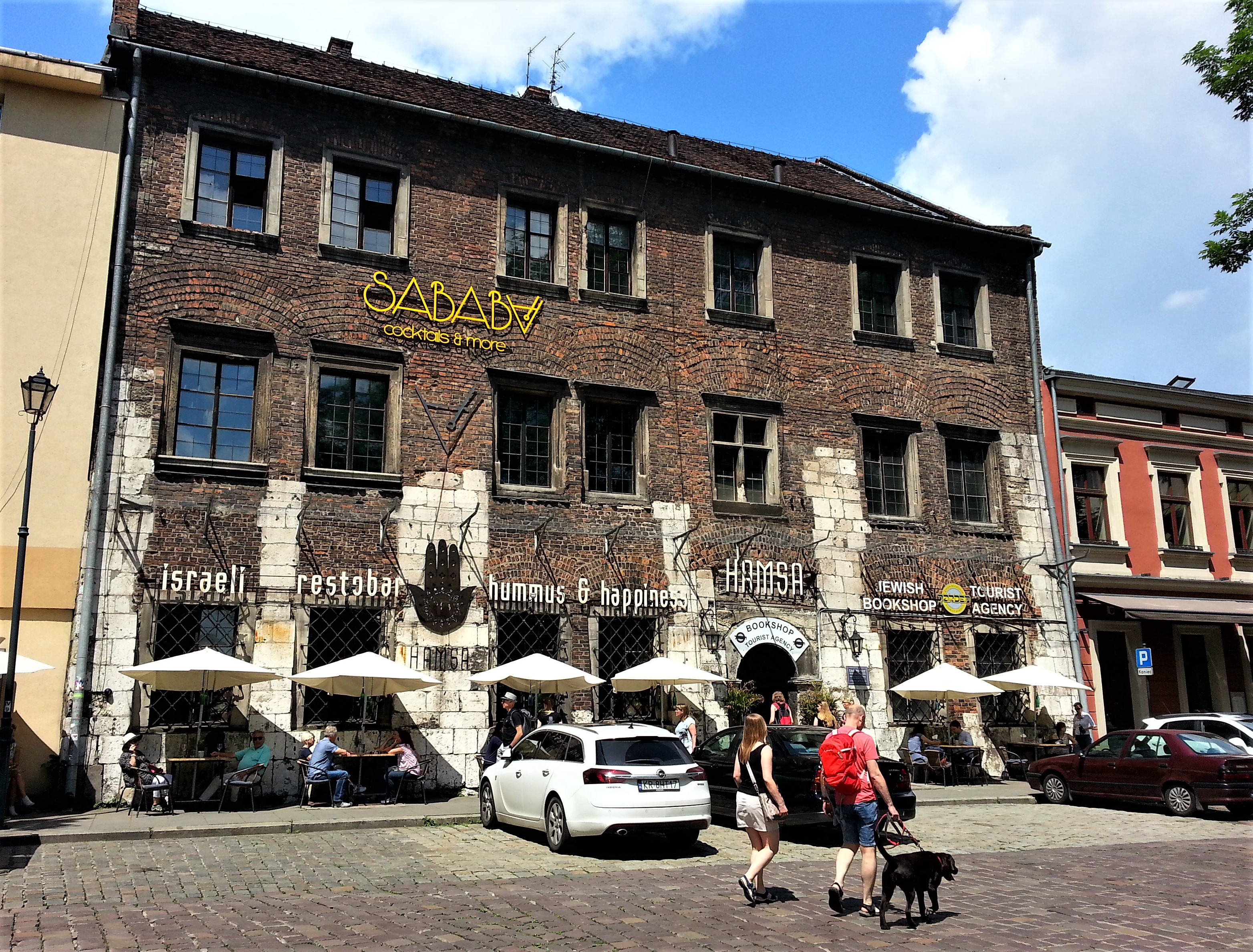 Kazimierz, Krakow's old Jewish quarter, has been revitalized since the end of the Communist era. 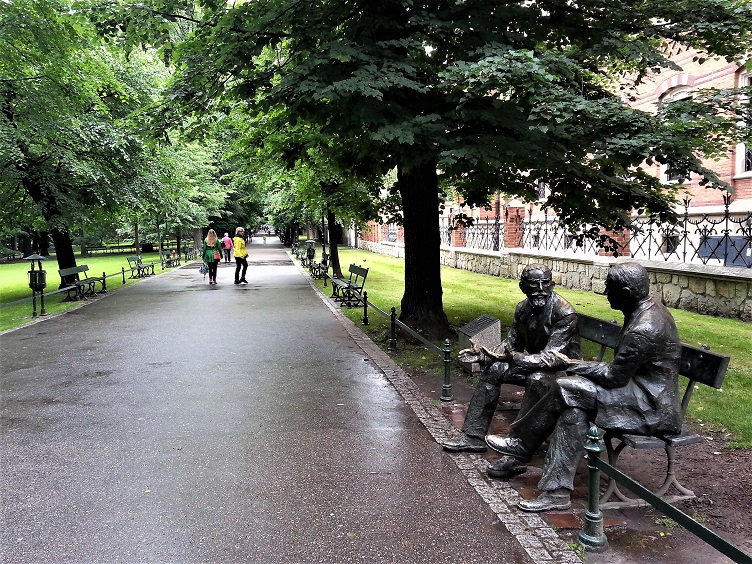 The Planty, a ribbon of parkland, rings Krakow's Old Town. 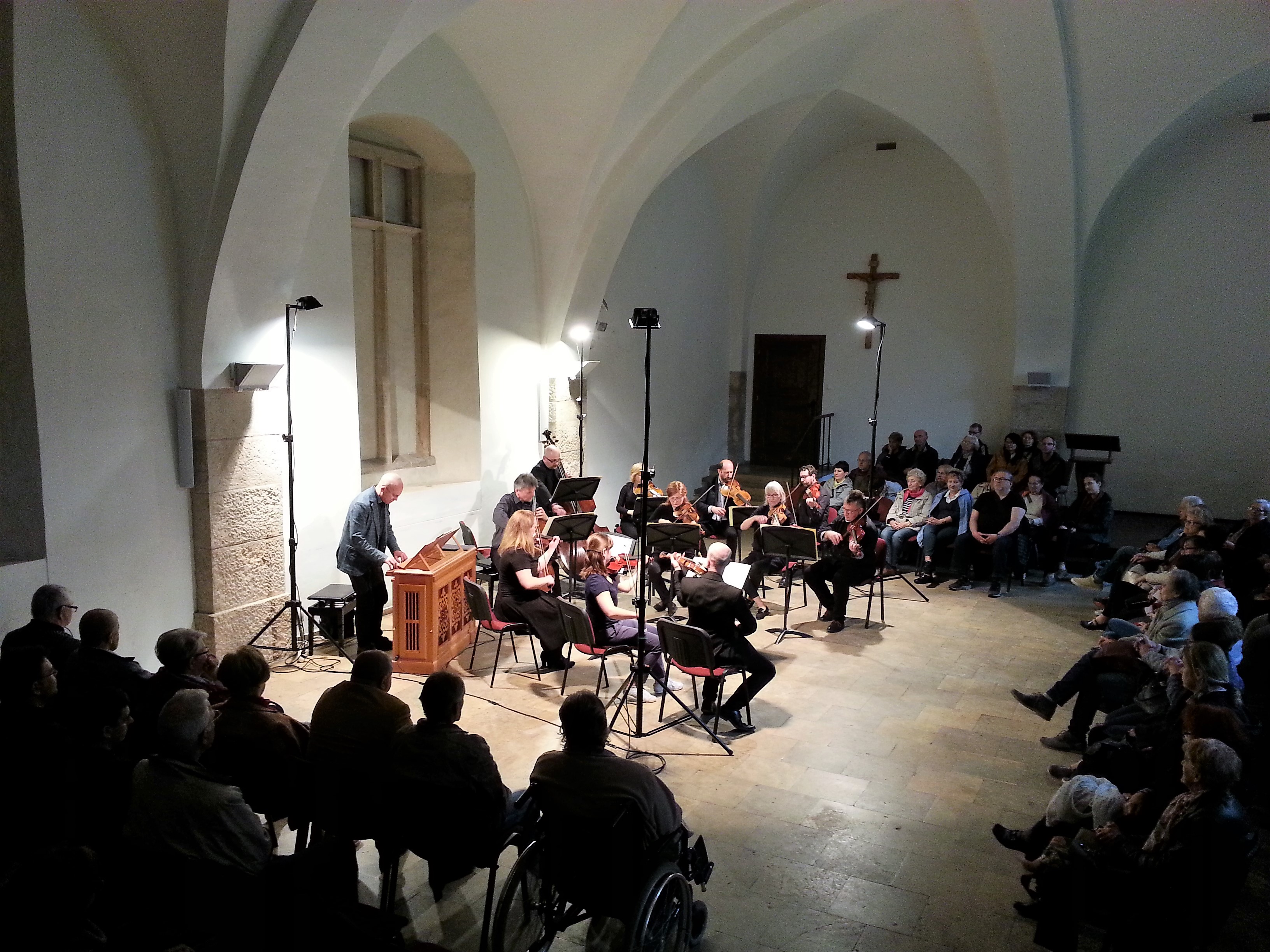 A concert by the internationally recognized Capella Cracoviensis. Cost: 5 zloty, or less than $1.50.

By U.S. and Western European standards, prices in Krakow are a bargain. By all appearances it’s a place that’s affordable for students (the Jagiellonian University, located in the center city, has an enrollment of some 40,000) and families. And while Garvin’s book mentions Krakow only in passing, the city is rich in public spaces—chief among them Rynek Glowny and the Planty, a ribbon of tree-covered parkland that rings the Old Town, providing shade in the hot months and a less-hectic way to navigate the urban core.

In addition to a booming private sector, affordability and an abundant public realm, Krakow also has two characteristics that I think any great city must possess: a wealth of educational and cultural assets and a rich history that it’s determined to preserve. The city hosts a major annual documentary film festival and the growing Krakow Photomonth Festival. Concerts, including many featuring musicians associated with the Academy of Music in Krakow, are numerous and often low-cost or free. Most of the Old Town’s historic structures such as the Church of St. Mary and the Sukiennice, or Cloth Hall, also are highly accessible. To be sure, Krakow is a tourist magnet these days, but it still seems foremost a place for the people who live there.

Is Krakow a great city? It hasn’t cracked the top 100 on Mercer’s Quality of Living Ranking, but maybe that’s a good thing—part of what makes it seem so livable.

And what about Rochester? I’ve written about its affordability edge, especially in housing costs (see the new post by the Beacon’s Alex Zapesochny on our No. 1 real estate market ranking), and the Beacon’s Kent Gardner recently argued forcefully that our region’s cultural ecosystem (vividly on display during the Rochester International Jazz Festival) is a powerful asset we should fully embrace. The same is true of our educational institutions. As for the public realm, in downtown it’s underwhelming today—but with Parcel 5’s future still to be determined and the promise of ROC the Riverway, that could change in a relatively short period of time.

But even if all that is achieved, will Rochester be a place that offers people “a chance to achieve their dreams”? In a recent Brookings Institution report, our region got fairly high marks for gains in prosperity and overall economic inclusion since the end of the Great Recession. But in terms of racial inclusion, Rochester fared poorly—in fact, it ranks near the bottom among the 100 largest U.S. metro areas. And Rochester’s rate of child poverty is among the highest in the nation.

To become a truly great city for those who live here, we must first define what that means to us. Experts like Kotkin and Garvin can serve as guides, but they cannot decide for us. To me, the definition should include all the characteristics I’ve outlined here. But I also think greatness might lie most of all in solving our greatest challenge.

What do you think?

5 thoughts on “The ‘great’ debate”